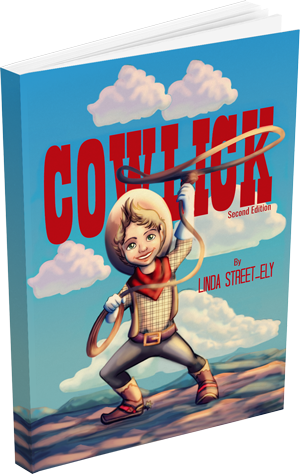 Six-year-old Sanderson Hamilton Jefferson Burrison loved his family, their home on the farm, their cows, and his teacher. Everyone called him “Cowlick” because of the tuft of hair that stood up at the top of his forehead.

Excited about starting first grade, Cowlick soon learned that not everyone understood the love of cows as he did. Not everyone liked his nickname, or his hair. As Cowlick learned, even when people say mean things we can be strong, and we can win by doing things that are right

Climb inside Cowlick’s story and find out how a boy was brave, even when other children were making fun of him. Then talk about it: Who won, what was won, what was the right thing to do, and why it was right?

Linda is an award-winning, multi-genre author. She holds an airline transport pilot certificate, a commercial seaplane certificate and a tailwheel endorsement. She has air raced all over the U.S., including four times in the historic... read more »

Suddenly, he heard the mean boys yelling, and then it sounded like they were crying! He could tell they were afraid of something.

Everyone heard the noise, and Cowlick and all the other children ran over to see what was the matter.

There at the edge of the schoolyard was a wild animal, and it was snarling and growling at those mean boys!

“Oh no,” thought Cowlick. “Even though they were not nice to me, I don’t want them to get hurt!”

Cowlick ran back into the classroom very fast and grabbed his rope.

He came running back out to the playground just in time!

The boys were afraid of the wild animal, and they were in danger!