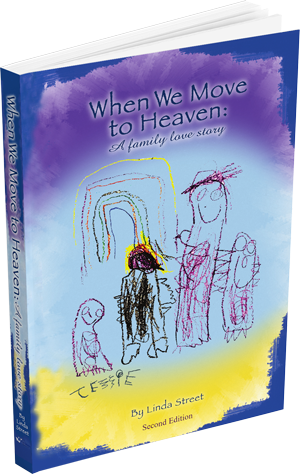 When We Move to Heaven

A true story of faith, love, family, tragedy, grace, and God. Not knowing that very soon she would be moving to heaven, four-year old Jessica Street drew a prophetic picture. This drawing would serve as a message of comfort and of hope for Linda, Jessica’s mother. It would also become the cover of this book, a message of hope for all God’s people. From the ashes of painful loss Linda finds healing, strength, hope, and joy for all eternity. And a peace that passes all understanding. Read how God raised Linda from the darkest depths to soar on eagles’ wings. Her journey will leave you in awe of God’s power and faithfulness. Be inspired and comforted in God’s great plan for eternal life.

Linda is an award-winning, multi-genre author. She holds an airline transport pilot certificate, a commercial seaplane certificate and a tailwheel endorsement. She has air raced all over the U.S., including four times in the historic... read more »

When We Move to Heaven – Reviews

Linda's story is living proof that the God of all comfort, who comforted her during her deepest sorrow, will use her pain to comfort others. I believe those who read her book and hear her story can find hope and healing and strength.
Sheriff Ronnie SprinkleBotetourt County, VA
From brokenness to healing, from healing to healer Linda Street has made her journey. To read her story in When We Move to Heaven is to be given a passport to travel the hard road of pain only to discover the 'peace that passes all understanding
(The late) Dr. Charles G. FullerFormer Senior Pastor, First Baptist Church, Roanoke, VA
This is not just a traumatic story, but an account of someone's faith in God as she walked the most painful path. Linda models for all of us how to walk through the darkest path and see God. Every therapist should read her story.
Martha M. Furman, LPC, LMFTTotal Life Counseling, Inc, and Gentle Shepherd Hospice, Salem, VA
As a professional aerobatic pilot, I've had the opportunity to meet many pilots. Linda's unique story riveted my attention. Even for the most experienced pilots, flying requires extreme mental and physical stamina...100 percent focus. Faith and flying are Linda's saving grace. I commend Linda for writing When We Move to Heaven and for sharing her message with others.
Patty WagstaffPatty Wagstaff Airshows, Inc., St. Augustine, FL
We have seen our share of serious incidents, but this one was unlike any other. I have been a member of the Troutville Fire Department for over 20 years and this is the most tragic fire our department has experienced during that time. Meeting someone who has been through so much pain and heartache yet can still be so powerful and uplifting, it is hard to believe the terrible pain she has been through and yet she can still touch so many hearts with her message. Linda's words are in inspiration.
Greg SlebodaFire Chief, Troutville Volunteer Fire Department, Troutville, VA
I was extremely moved by this story of monumental tragedy and grief and all the ways God touched Linda as she slowly became able to function again. It's a picture of deep pain over which the love of God was able to be victorious both through His word and through His people.
Margery W.
I bought this book at a writer's meeting. The story of how Linda dealt with her overwhelming loss is moving. Great book for someone who is trying to get a grip on their own sorrow.
Sharon C.
Tragic and beautiful, well written.
Anonymous
Previous
Next

When We Move to Heaven

I knew Mycol was already awake, but when I walked into my office and looked at my phone, the message light wasn’t blinking.

That’s strange, I thought. He must be sleeping in.

Minutes later Cheryl called from her cell phone. “Linda, have the police called you?”

“They were just here looking for you, but you had already left.”

“Who was there?” I asked, a feeling of unease beginning to creep into my stomach. “What did they want?”